Markus Luepertz in the light of eternity.

The painter-prince Markus Luepertz enriches the world heritage Bamberg with contemporary art. After his bronze sculpture Apollo the master immortalizes himself a second time in Bamberg with expressive glass painting for the church St. Elizabeth.

Markus Luepertz was commissioned to design the eight monumental windows for St. Elizabeth, thus making a statement of contemporary art in Bamberg full with radiant energy. The commission is borne by a broad alliance of the Dompfarrstiftung St. Peter and St. George, the Dioezesanmuseum, the Kunstverein Bamberg, the Architektur-Treff Bamberg and the Foerderverein Kunstraum-Jetzt. The cost for the realization of Luepertz’ work sums up to a six-digit amount, the money is planned to be come up by the help of art-minded donators and sponsors.

St. Elizabeth in the Sand is a little former hospital church from the 14th century, a gem in the heart of the historic centre of Bamberg which is currently refurbished comprehensively, subsidized by means of the Federal government that were released during the financial crisis as investment programme. As part of the last major restoration in the 19th century the chancel window was donated, all other eight windows, however, got profane sheet glass without any artistic design. Markus Luepertz isn’t unknown in Bamberg anymore, with his bronze sculpture Apollo being placed directly in front of the church St. Elizabeth since 2006. The Apollo by Luepertz was acquired with donations after his exhibition of large-scale sculptures in the centre of Bamberg, and triggered an ongoing debate on the interaction with modern art in a town that is paralyzed by the burden of the label world heritage and is hardly ever able to free itself from the look at the past.

Markus Luepertz and the miracle of the roses.

In his drafts Luepertz illustrates scenes of the life of Saint Elizabeth with strongly expressive colors and forms. The Landgravine of Thuringia, also called Elizabeth of Hungary, took care of the deserving poor. Charity and human dignity are themes of universal validity in the field of art, especially nowadays they give prove of their relevance. In the Middle Ages this was not a matter of course, that’s why Elizabeth was reproached with lavishness at the court again and again. When she descended from the castle with a hamper filled with bread, her husband Landgrave Ludwig IV took her to task: ”What are you carrying there?” When he opened the hamper, he saw nothing else than roses. Since then the ”Miracle of the Roses” is inextricably linked to the work of St. Elizabeth. Markus Luepertz chose the motif of the basket of roses as graphic base theme for his drafts. The ornamental pattern resulting from it will later form the framework of the lead glazing. Luepertz pointed out that this commission is very important to him, as he is fascinated by the medium of glass painting and has gained experience of many years realizing similar projects such as the artistic design of the glass windows of St. Andrew in Cologne.

Professor Luepertz declared, that coming to Bamberg and showing his drafts in such an early and disputable stadium had given him a headache, as they were still standing at the beginning of a creative and transformatory process and couldn’t be compared with the finished glass windows by no means. The magic light they are meant to create one day, can be merely made out on the long rolls of paper which are presented at the Kunstraum Kesselhaus Bamberg.

The presented paper works will fit in the architecture after their realization in glass and respond to the lighting conditions in the church interior. But also in the Kunstraum Kesselhaus Bamberg the presentation doesn’t lack in impression. The rough charm of the industrial building with its raw concrete walls creates an almost sacred aura of its own which corresponds to the final destination of the works by Luepertz. Markus Luepertz called himself a traditionalist and emphasized the right of painting to exist, also in this day and age. Despite the strong competition with innovative artistic means of expression painting is an ”intelligent métier” he said.

Painter-prince Luepertz didn’t leave any doubt in his own genius and the importance of his oeuvre for eternity. For him a side effect of this commission that shouldn’t be underestimated would be, that one can’t take down glass windows in a church as simply as paintings in a museum. As Luepertz is working for eternity, he owes it to himself, that the windows will turn out magnificent. In the midst of an art market that is dominated by wall street brokers and art auctioneers dabbling in art for their own sake like Jeff Koons and Damian Hirst, the dandyism by Markus Luepertz belonging to a different era appears virtually refreshing. 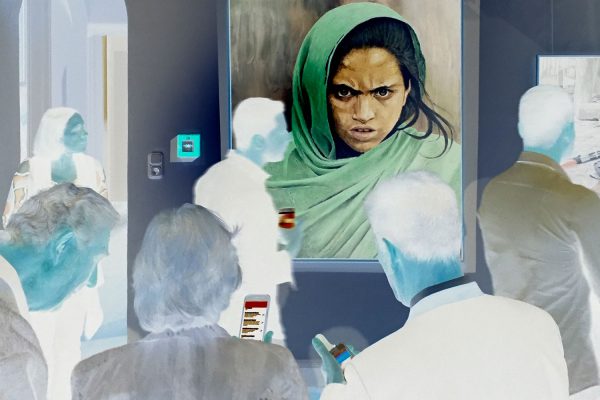 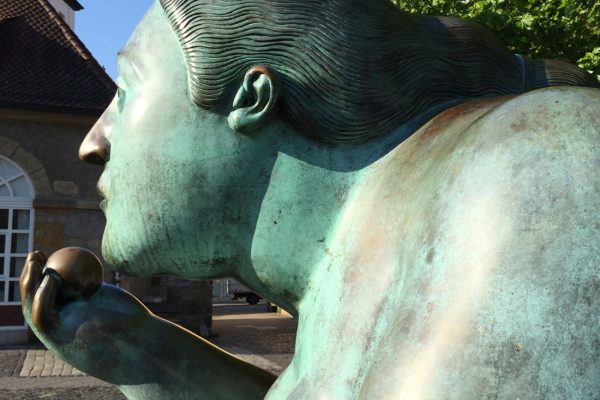